Brief: In April 2010, the school’s primary school was undergoing new extension work to the existing Victorian buildings when a fire broke out and destroyed half of the school. We received a call in July from the school’s facilities manager, who had discovered us through the APL database. He explained that the school was to be temporarily re-housed within the grounds of the secondary school which was on two separate sites. One area would be for children from ages 4-6 and the other for children between ages 11-12. We arranged a meeting to assess the two sites and to talk more in detail about what was required.

The larger space was at Pepy’s road and surrounded the original Victorian buildings of the main school. The site is on a hilly elevation and has a north-westerly aspect. At our site assessment we noted the grounds were very neglected and overgrown. A statue of the school’s founder, Robert Aske dominated the main lawn area. The site is surrounded by very mature Lime trees.
The smaller site was within an existing commemorative garden and surrounded the modern buildings, and car parking area.

The brief was for both sites to have temporary school buildings placed within them for up to three years. The surrounding spaces would have to be cleared and new gardens designed. These would be the children’s new recreational areas at break times.

The timescale for this job was very tight. The children had been placed in temporary sites and some at other schools. It was essential that everything was completed in time for the beginning of the autumn term. This was a mammoth task. The organisation and scheduling had to be finite. The orchestration of the temporary building installation and the completion of the ground works and hard landscaping had to flow seamlessly. The children were due back in class and we had 9-10 weeks to fulfil this brief.

After the meeting, we had to put together a pitch in the form of an in-depth proposal. This outlined our ideas, overall budget estimates and scheduling plans. At this stage there were no designs and it was very hard to predict costs but the trustees of the school and the insurers needed some figures in place. The facilities manager was adamant that the playgrounds be more than just functional. He felt that the children had been displaced and disrupted so much, that an emphasis on ‘planting’ and ‘fun’ should be at its heart. The brief wasn’t just to create bland amenity spaces for the children to play in.

Our ultimate aims were to provide two gardens that would be spacious, fun, functional, and safe. They had to be durable and sympathetic to the surrounding architecture and aesthetically and visually stimulating. We also wanted to integrate and reuse playground equipment from the previous school.

The Pepy’s road site was split between age groups. The primary children had a visually stimulating, colourful rubber crumb outdoor safe surface with non-slip deck surface area. A funky wooden fence was commissioned to create a fun, yet functional separation from the older juniors.

The planting design for Pepy’s road was created with a long-term vision in sight. The space was to become a communal garden for the school once the junior children had been relocated back to their own classrooms. Jerningham road site was primarily for the 11-12 year age group and incorporated a large non-slip deck, benches and sympathetic planting. The children were to be taught in pre-fabricated classrooms and it was important to create an environment for the children to spend their break times in. 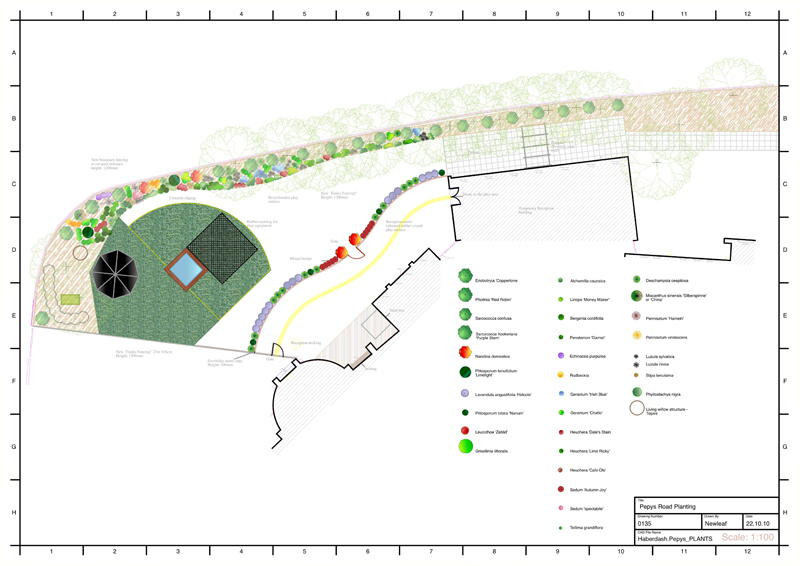 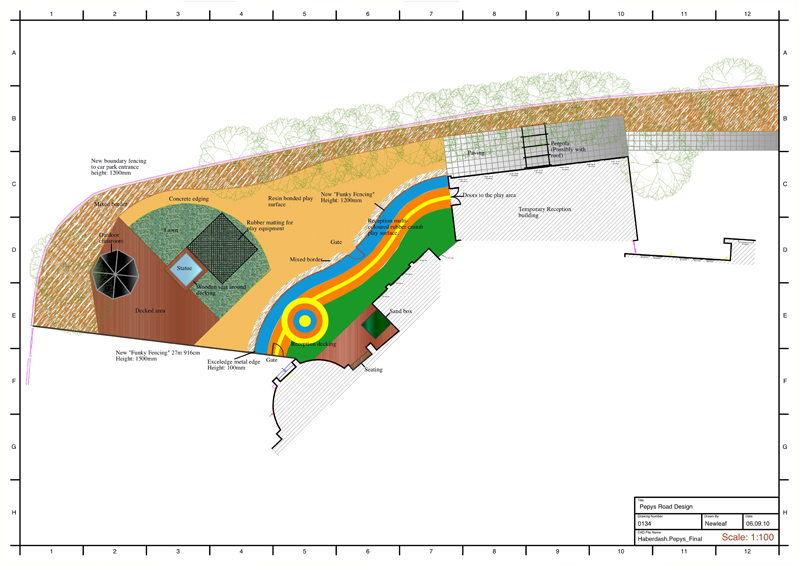